The early Olympias sported a curved style that was very distinctive. When the company split into two along with the rest of Germany after WWII, Optima would keep production of the earlier Progress-style machines.

After the war, the company known as Olympia would be split into two, with Optima being the half that served East Germany. For a time, they would produce models that were very reminiscent of the pre-war Olympia models sold under the "Progress" type, despite carrying the new "Elite" model name. With their distinctive, forward-flipping ribbon covers and solid internals, these are very cool machines. 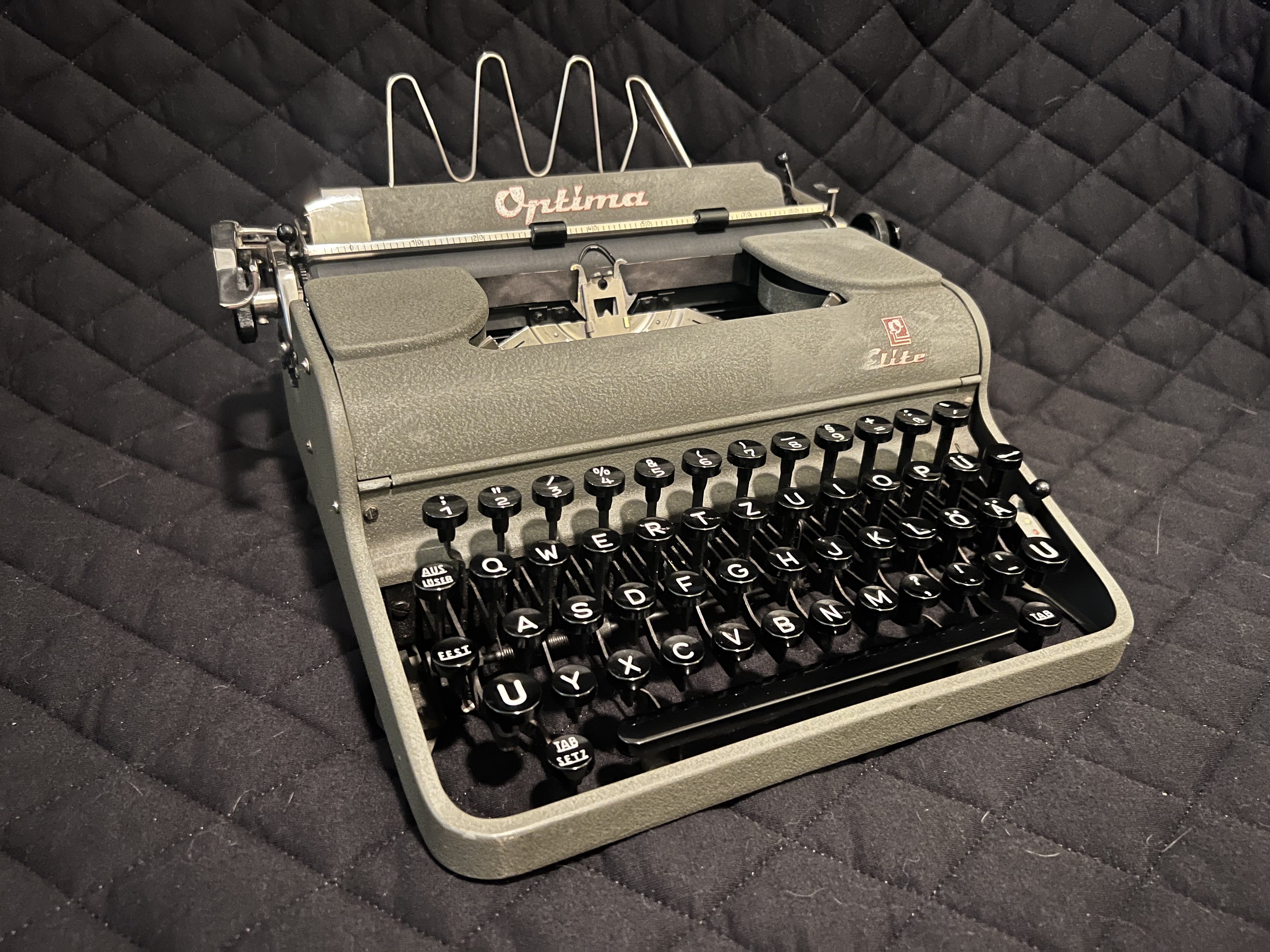 While this particular one is in the green crinkle paint, they also came in the high-gloss finish as well. Unfortunately the logo on this one was subjected to a "cleaning" effort which appears to have scrubbed some of it away. 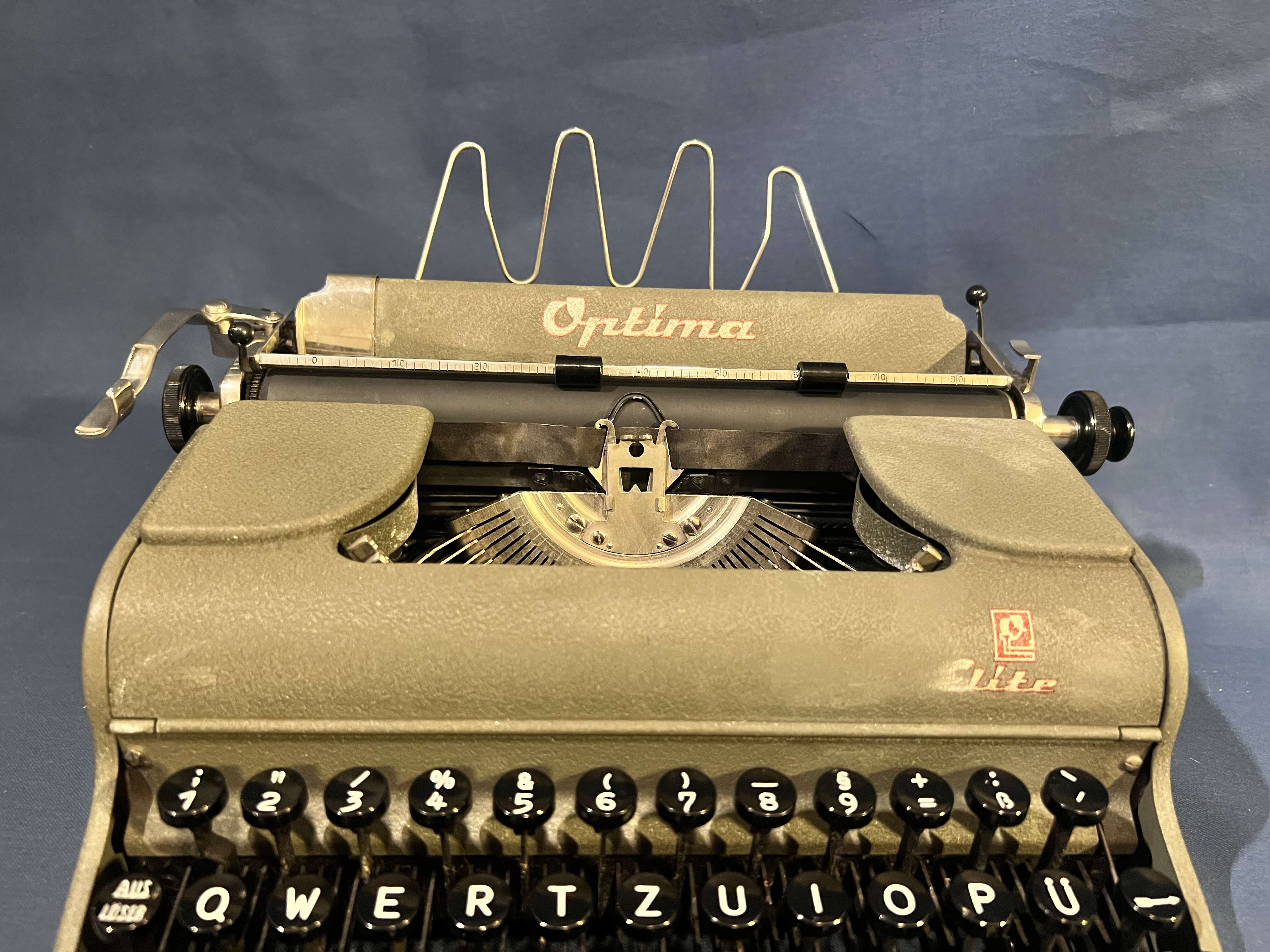 Eventually the two companies would diverge in style however, with the later Optima Elite's sporting a rounded plastic ribbon cover that is more akin to the loose covers of the Adlers. Additionally, they would do away with the wonderfully styled "toaster coil" of a paper rest, which I think just looks rather neat. No matter what angle you look at it from, the rest appears bent, however I can assure you that it's not; the outside sections merely angle backwards. 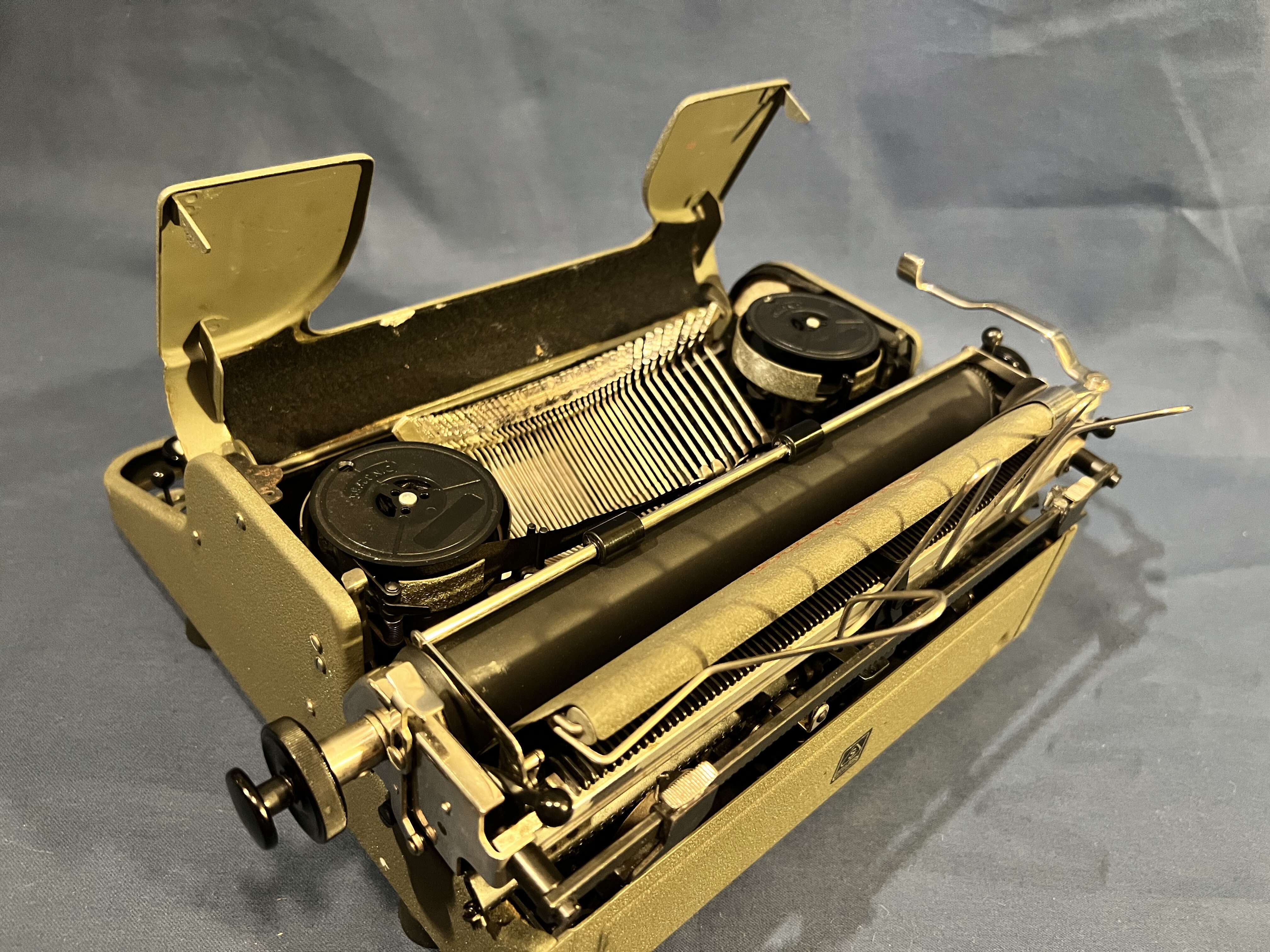 No matter what angle you look at it from, the rest appears bent, however I can assure you that it's not; the outside sections merely angle backwards, also notice the forward-flip ribbon cover 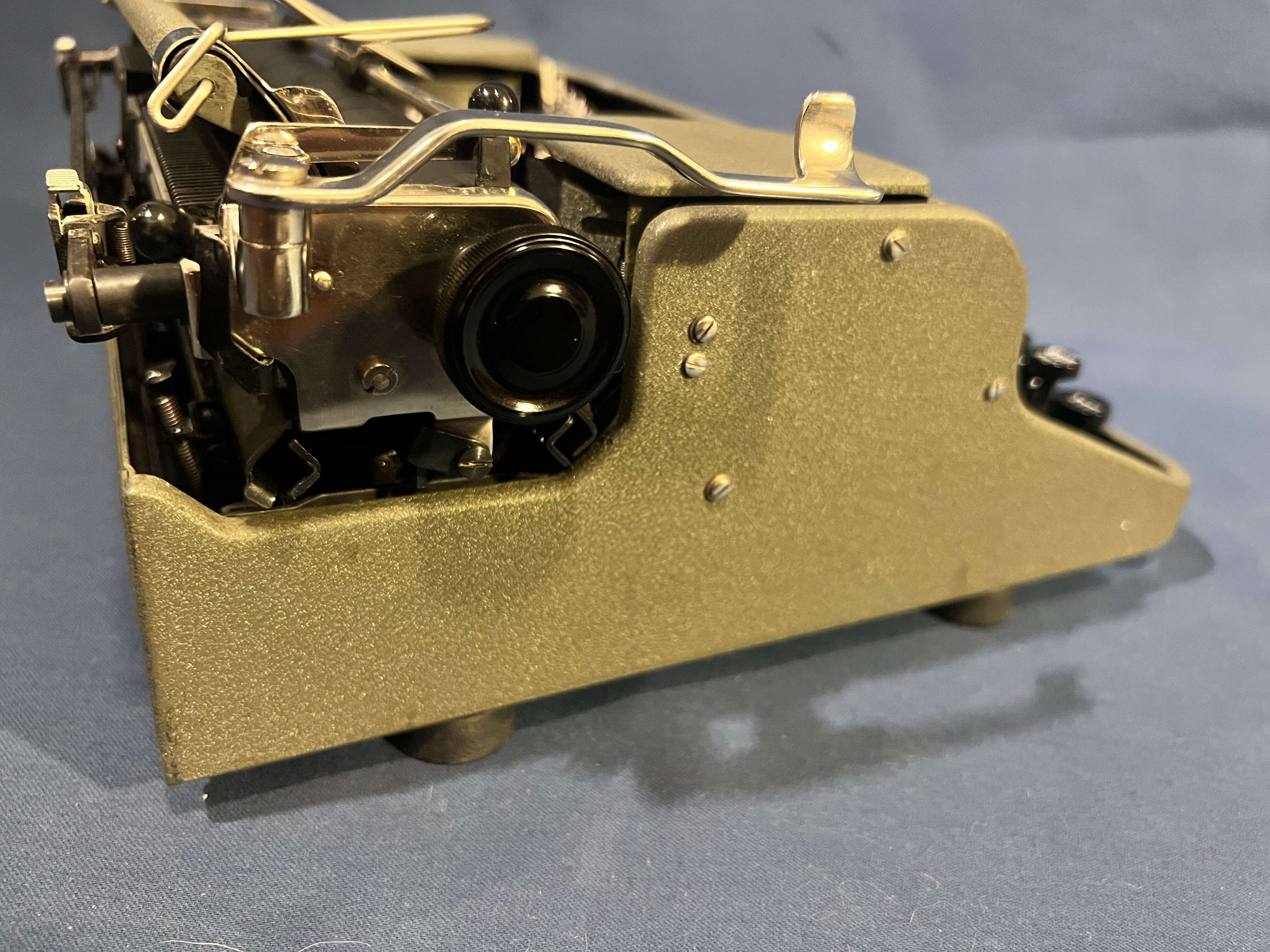 While the Olympia Simplex had smooth sides, the Progress had screws similar to the ones here. On the Elite however they are unfinished, whereas on the Progress models they typically were matched to the same gloss black. 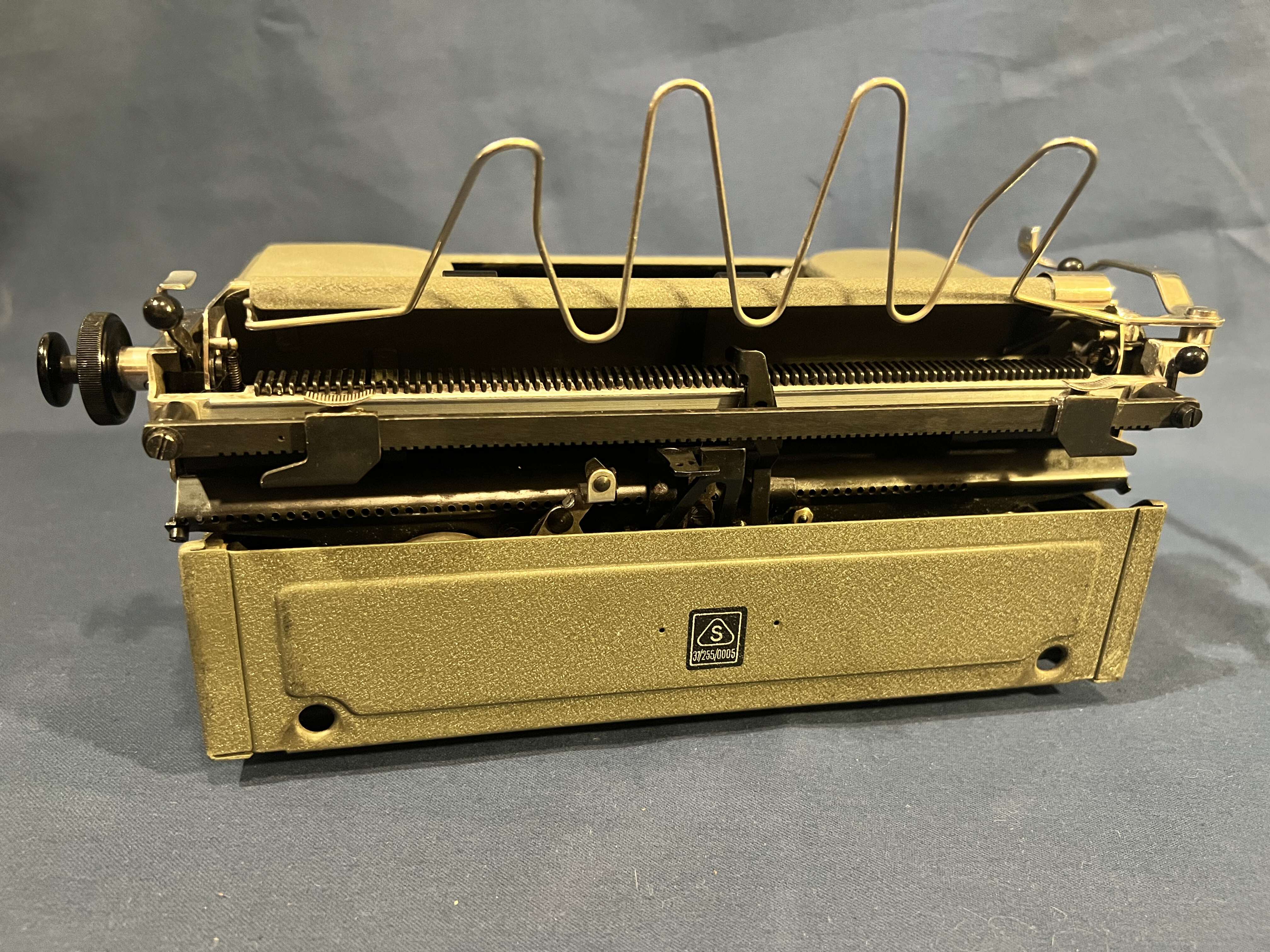 Unlike the SM series that would follow, this machine doesn't have any brand markings on the rear panel of the body. Merely this icon and number series.